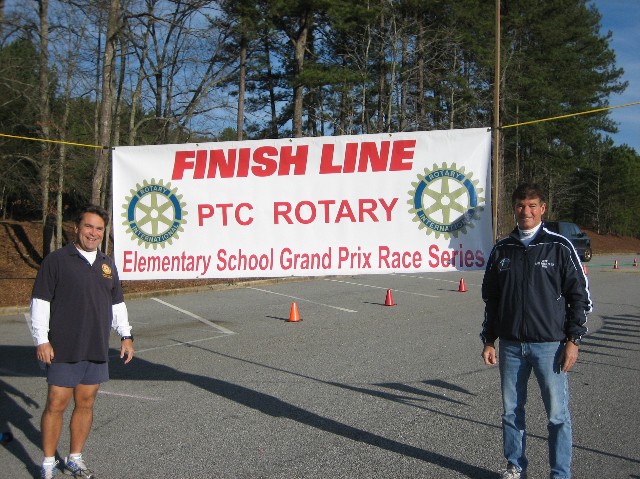 The Rotary Club of Peachtree City, in cooperation with the PTC Running Club has created a series of races that provide the opportunity for both children and adults to participate in healthy events as well as raising much needed funds for our local elementary schools.  Last year about $100,000 was raised by the schools and the series of races has became one more campaign in the fight against childhood obesity

Points will be accumulated at each race, for all age groups, both male and female.  At the end of the year awards will be presented to the top three runners, both male and female, in all age groups (ages 8& < to 75+), having accumulated the most points.  Special bonus points will be awarded based on the number of races completed.  Each race will be conducted by the individual schools as fundraisers for that school only.  Waivers must be signed and fees paid for each race.

View our month-by-month calendar of PTCRC events for 2022.

Two Weeks Away until the Peachtree City Classic! It's getting real - how's your training coming along? Join us next Saturday for a Course Preview / Grand Prix. Our Grand Prix events are free... and guess what? Our Sponsor Fleet Feet will be there! Together we will walk and/or run the 5K and the 15K courses. Don't miss out!Where to Meet, you ask?? The Fred Amphitheater at 8:00 a.m. Saturday, Oct. 8th! ... See MoreSee Less

LAST CALL: Prices for the Peachtree City Classic increase at Midnight Tonight! Use Promo Code LASTCHANCE for $10 off. Don't miss out on this GREAT deal. There won't be another one like it. More info ptcrc.com!! ... See MoreSee Less

We hope everyone is getting outside and enjoying this amazing weather! No excuses now - we have working water fountains and miles of cart paths!! Happy Running! ... See MoreSee Less
View on Facebook
· Share

HAPPY FALL Y'ALL! This is your last chance to get the best price possible for the Peachtree City Classic. Registration Prices will increase Oct. 1st!To help encourage you along, use Promo Code: LASTCHANCE to get $10.00 -- offer expires midnight on Oct. 1st. This will be our last promotional offer. (Please note that shirt sizes will no be guaranteed after Oct. 1st as well. Sign-up while supplies last and you can secure your shirt). ... See MoreSee Less

Prices will increase Oct. 1st! Now is the time to sign-up... the weather is cooling off, the leaves are falling... it's going to be a wonderful Peachtree City Classic! Join us!Register at www.ptcrc.com or click link in bio ... See MoreSee Less

What a wonderful day at the Dragon Boat Festival! Thank you to everyone who stopped by to chat and say hello! It’s was the perfect day to row! #rotaryclub ... See MoreSee Less

Dragon Boat Races tomorrow!! Can't wait to see you there! Stop by our table and say hi. ... See MoreSee Less